Our Trip to France 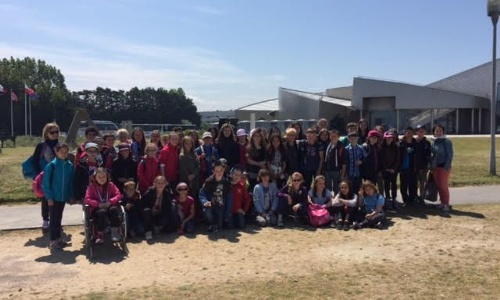 The following report was written, on their  way home, by the children and adults who went to France.

Wow, what a fantastic week we’ve had! The children have experienced so many wonderful adventures and been thoroughly spoilt by their host families.

On our arrival on Monday the French students had decorated their corridors and classrooms with many English influenced welcoming posters and pictures.  They were so excited we had finally arrived. The rest of the day was spent getting to know our host families, giving us a guided tour of our temporary homes and recovering from our very early start.

Tuesday morning, refreshed and raring to go, we were welcomed into Charles Huard school where we spent the morning in class taking part in an English/French identification quiz. This was followed by an art session where we contributed to a frieze to decorate the windows in the style of Keith Haring. The afternoon started with a short walk to the local sports hall where teams all participated in a range of relay races.  The children spent the evening with their host families where various activities had been organised from barbecues to crepe parties.

On Wednesday we  visited the beautiful city of Caen for a tour around the sites and a ramble around the castle ruins and walls.  Then the  moment had finally arrived.... our trip to Festyland! Four fun-filled hours were spent racing down the water rides (or getting soaked in Mrs Gasser's case), screaming our way through swing boats, spinning chairs and rattling on rollercoasters with our French counterparts.

Thursday was a day of history, Arranmanche is one of the beaches along the Normandy coast where the D-day landings took place. A 360˚ cinema film showed a poignant short film about the life of those during  World War II. Then a short trip  down the coast to Juno beach, to the Canadians wonderful museum full of interactive exhibits  about the war. We also took part in a workshop with Matt, our Canadian guide, who introduced us to the lives of both French and Canadian people during WW2 and gave us an insight into the impact the war had on family life. In the evening the families and school staff had prepared a fantastic farewell disco where many tables were laden with food prepared for the occasion.

Friday was a quiet morning, after all the busy days and late evenings. We had a choice of watching a film in one class or playing board games or colouring activities in another. After a last lunch with our friends and a lot of tearful farewells we boarded our coach to the ferry port to begin our journey home.

Our visit may be over but I’m sure the memories will last a lifetime.