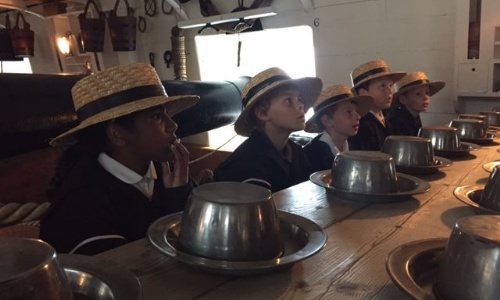 As part of the Best of British topic both Year 5 classes had a very special trip on board two of the British Navy's most famous ships; the HMS Victory and HMS Warrior, at Portsmouth's Historic Dockyard.

Whilst on board the ships they had the chance to look around each deck; from the upper deck, right down to the depths of the engine rooms. On the HMS Victory, the children had a taste of what life would have been like for Admiral Nelson and his crew, living in cramped conditions with limited supplies, whilst being under attack from the French and Spanish fleets. The children stood next to the exact spot where Nelson got shot, as Britain gained victory at The Battle of Trafalgar in 1805, making history for our country!

We look forward to seeing some of the work that will be produced following this memorable day of learning and experiencing local history hands on, away from the classroom.