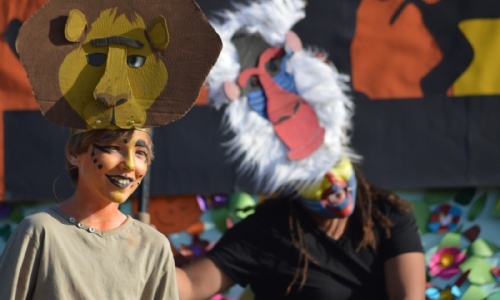 In the summer term the drama club performed their production of Disney's Lion King Jr!

The stage was set. The audience were ready in their chairs or on their blankets. Suddenly, the music began and the chatter stopped upbruptly. Onto the stage stepped a young girl dressed and made up as the familiar character, Rafiki. She lifted her head and sang out a note clear and perfect, the audience were immediately enraptured. As the song progressed more voices joined the young girls, a pride of lions made their way onto the stage followed by a pack of hyenas. Then, from the back of the field all manner of animal began to make their way through the audience...elephants, hippos, giraffes, snakes, zebras and monkeys to name a few. All these creatures made their way onto the stage, lifting their heads and voices high. The final note of the song rang out and the audience errupted into applause. Never had anything so spectacular been seen on the Southbourne Junior field!

The rest of the performance was also a complete triumph with all children acting, dancing and singing their way though the show. The staff were, as always, extremely proud of the Southbourne Junior children and their constant commitment to achieving the very best they are capable of!