Hands on History help Upperbase look at the Ancient Greeks 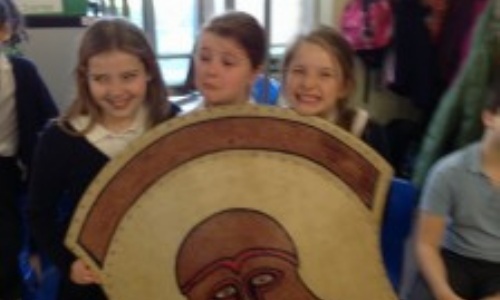 As part of the Upperbase Ancient Greece topic the year 5 and 6 children were visited to by the Hands on History last week. Read about the children's experiences below.

'On  12th January 2016 some people named Martin and Paula came in and told the year 5 and classes of Southbourne Juniors School what is was like to be an Ancient Greek back in 776BC .

In the morning we learnt about the weapons and who would wear what in battle; we also went round the classes and experienced some amazing things such as grinding bread;holding weapons and learning how to form and shield wall.  In the afternoon we all went outside and Martin shot some arrows and they shot incredibly high. After that we went into the hall and learnt how to amputate a leg and how Greek doctors cure disease. To summarise the day was very fun and I learnt a lot about the Ancient Greeks'. (Katie)

'On Tuesday the 12th of January 2 people from Hands on History came into our school to tell us about the Ancient Greeks. Taking us outside to show us some us some incredible things. What we take for granted, for example, lighting a fire just with a match, the Ancient Greeks had to scratch some metal until a tiny spark came out and then stuffed it into some straw and eventually you had a fire. One gruesome part of our day was when Martin demonstrated, on Mr Holder, how the Ancient Greeks amputated an injured leg.' (Millie)